Tatenda Jamera delivered an SAE Extra masterclass on creating commercials at our London campus on 24 September, and at our Oxford campus on 10 October. Both talks were really engaging sessions in which students learned the art of telling a story in 30 seconds.

After deciding that an Economics degree wasn’t for him, Tatenda was playing around with Adobe CS3 when he realised his true calling was Film. Not long after that, he started studying at SAE London.

He started researching jobs whilst still on the course, and his first gig was working unpaid on an NDubz video shoot, making tea. He told himself to make the most of the experience, and vowed to make them the best tea they had ever had. It clearly worked, because the producer called him again, and for the next job he earned £50. From then on, all the jobs he took were paid. At the end of the SAE Oxford talk, one student asked Tatenda where he found out about this first gig from and he said it was on GumTree - and he is still working with the producer to this day. Those early connections you make in your career really might last a lifetime! 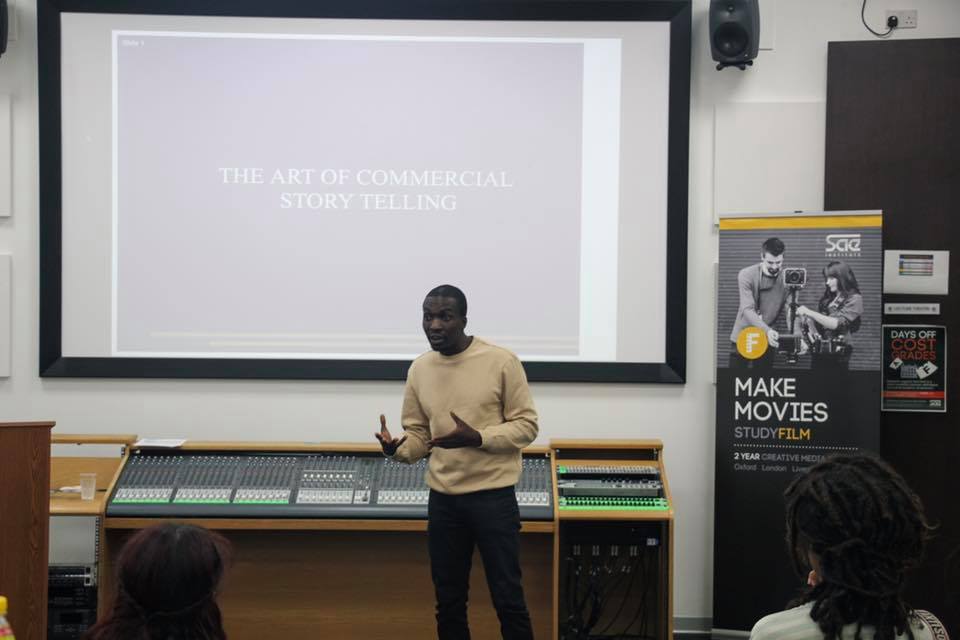 Digital Film Production student Michele Granata said: “It was a formative experience as it's always great to see practically how a graduate is finding his journey in the film industry. It's always more difficult to understand how many job opportunities you have when you are specialized in an artistic subject. That's why it was good for me. Besides I found him an interesting human being.”

Tatenda started out as a runner before developing an interest in lighting. He loved how it could change the atmosphere of a set completely, turning a warehouse into a kitchen, bedroom, or living room using lights alone. He worked for 5-6 years in lighting, and enjoyed being the first guy onto set. Whilst there’s a rush to set up a scene as lighting crew, there’s then a lull of 2-3 hours whilst they are filming a scene. During this time, Tatenda found himself mentally asking questions about the director’s thought process. Whilst he knew he didn’t have the authority to challenge their decisions, he kept critiquing their process and determining what he would do differently if he was in charge.

Once you’ve secured your first gig, it will get easier. But Tatenda’s advice was to network as much as possible. Hang around - even as an extra, as you will meet the people behind the film

Look for musicians you’d like to work with and go to where they are touring so you can meet their managers.

By doing this, Tatenda gradually got into directing and producing. He learned that the director needs to focus on the creative vision whereas the producer has a more operational role. At first, he didn’t know what material he wanted to make. But to the students he said: “It’s good to get your niche and then focus on that. Most big agencies will only focus on directors who have a niche.”

He stressed that commercials, although short, are one of the most difficult forms of content to produce because you have to encourage your audience to do something in a very short space of time e.g. buy a specific brand of washing detergent. With a feature film you have two hours to tell your audience how to think and feel! He showed a range of treatments and adverts from low-budget to high-end productions for Cadbury and Persil, to show how the creative process works from idea conception to delivery.

Tatenda stressed to the students how important it is to deliver on professional briefs, especially within the advertising agency. Each shot in the commercial counts. Any frame has to be a picture that you are proud of - as it’s worth thousands of pounds. He said: “When you work with other people and they ask for ‘A’ you have to deliver ‘A’ not ‘B and C’. On set they will be watching you like a hawk, so you have to make sure every frame is something they are asking for.”

Tatenda went through some of the pros and cons of working with an agency rather than working as an independent. He said that some brands like the fact that independent directors don’t need to be involved in lengthy communication process between agency and production company - and they can often speed the delivery process up. But on the flipside, he recognised that signed directors get to work with bigger brands and budgets (even if there are more people taking a piece of the pie). He reminded students that even if you are signed to an agency, you are still competing with other directors on their roster for the job.

Audio Production student Garnet Jackson said: “It was a great talk from Tatenda Jamera, whose drive and enthusiasm for pursuing the art, especially in such a commercial medium (pun half intended) is as inspiring as his work. Great insight into the world of directing and producing adverts as an independent filmmaker. I always like to attend these kind of events as there is plenty to learn which can be applied to my own endeavors. Lots of food for thought.”

The SAE graduate gave some invaluable advice to students looking to stand out from the crowd, and told them to not be afraid to pitch simple concepts. But the first thing you should always do is read the brief until you can recite it backwards - as the client will be able to tell that you have read it and it makes a good impression. Tatenda told the students that using Pinterest for images for treatments is often a lot more aesthetically pleasing than Google image searches. When it comes to formatting your treatment, make sure it is in landscape, with a black background to make it more fluid, and keep it short (10-12 pages is sufficient).

When it comes to producing the commercial itself, Tatenda stressed that the idea is paramount: you can have all the equipment in the world but if you don’t have a story there’s no point in making anything. Also, it pays to make friends with composers as audio can often carry a commercial (you don’t necessarily need text), as it is the emotional element that gives the story resonance to the viewer.

The students took a lot away from Tatenda’s talk, as well as sharing lots of advice about what to do to establish a successful career as a filmmaker, Tatenda also shared some of the mistakes he has made along the way in the hope of preventing students from making the same ones. Some of Tatenda’s early mistakes included not taking the full budget up front from a client who then went dark - he then still had people to pay out of his own pocket. This experience taught him the importance of contracts.

Digital Film Production student Althyr Pivatto said: “Tatenda Jamera's masterclass was like a commercial: succinct and to the point. He debunked some myths and exemplified with his experience. It was a very inspiring and encouraging masterclass.”

We’re extremely grateful that Tatenda took the time to come back to SAE and share his learning with the current students.

Tatenda said: “It’s always good to come back at SAE where my seed of filmmaking was planted. In one room there was so much talent and the future of the filmmaking industry looks promising and certainly brighter. Pioneers like SAE make this possible by creating opportunities for the upcoming generation of filmmakers and I am glad to have been a fruit of this process.”