Last week (13 May) SAE hosted a virtual SAE Extra event on the art of pitching, hosted by Luke Walton and Pete Sinclair from The Pitch Film Fund.

The Pitch Film Fund is a fund that helps develop emerging talent, with hubs in the UK and South Africa. Producer Luke Walton is director of the company, and he has spent more than a decade reviewing pitches so was well primed to give SAE students and applicants advice about what does and doesn’t work. Luke has produced more than 15 short films with RIF (Reel Issues Films), and he has a background in acting, voicing Hugglegrabber in Early Man, directed by Nick Park.

Pete Sinclair is the associate producer for The Pitch Film Fund and joined the team in November 2019. Before working for The Pitch he worked in content creation for a charity as well as freelance running on short films and TV series such as Netflix’s The Crown. He also has experience in Arts development and Theatre touring.

The session began with ten top tips about approaching pitching before there was a live pitching session where SAE Glasgow Film student Sean Bruce Monteith had the chance to pitch his Major Project feature-length film to Pete and Luke and get live feedback. Afterwards, the attendees were able to ask questions in a Q&A portion of the session, where Pete and Luke both shared additional insights about how to capture peoples’ attention and make them want to hear more about your film.

SAE Glasgow Digital Film Production student Tom Booth said: “I didn't know what to expect from the film pitching masterclass, but was pleasantly surprised. It’s not a thing I've actually thought much about, but it opened my eyes to another part of the film industry that I'm going to have to get used to in the future. And so it was enlightening and useful. I'm glad I attended.”

SAE London Digital Film Production student Clara Von Der Bey said: “I was very happy to attend the event. I am not the best at pitching, so this was extremely helpful. The guest speakers were great.”

SAE Glasgow Digital Film Production student Jack Welsh said: “I thought the session was great. The guys really knew what they were talking about and did their best to interact with the students given the circumstances. They also offered a good idea of what a film pitch would be like and the best ways to present your own film ideas.” 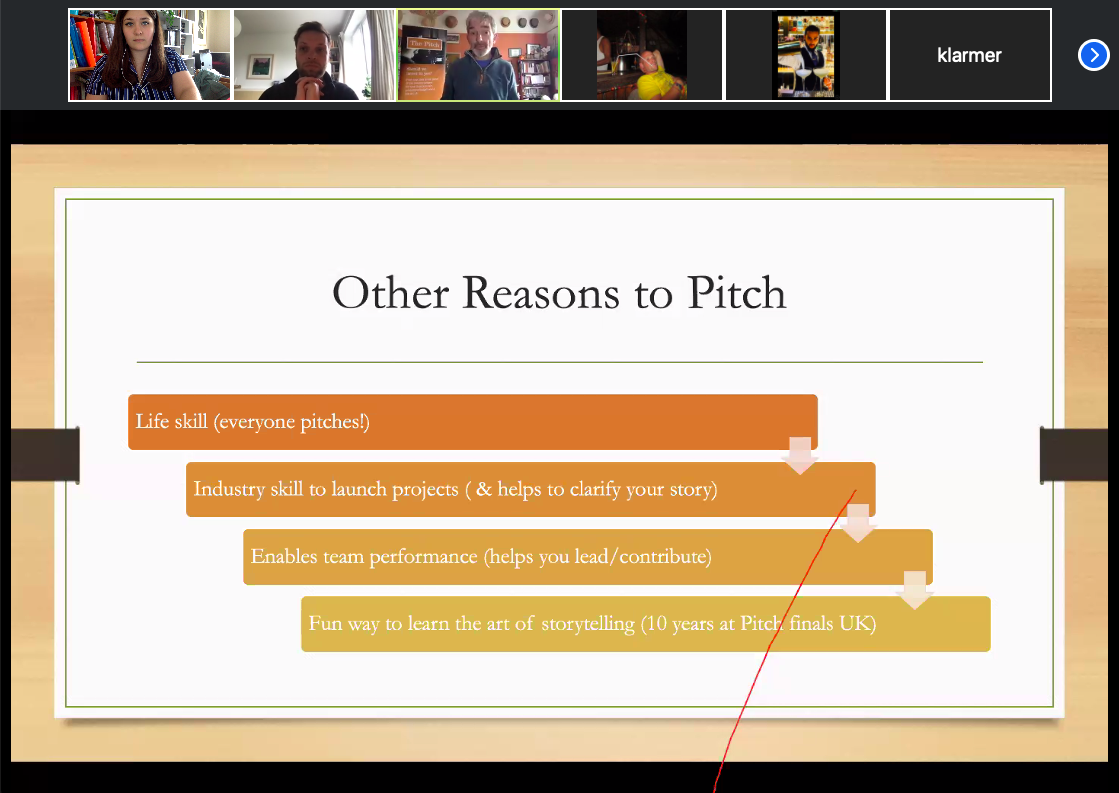 How to write a good story

Some of the key messages were that your story has to be good, you can be the best presenter in the world but ultimately the story is king. Luke and Pete recommend writing something you know about and suggested that writing a protagonist as a version of yourself can be a productive starting point - although there’s a fine line between drawing on your experiences and writing autobiographical material.

Do your research and preparation

Research is important - you need to think about what will sell, and should probably avoid what’s in vogue (which at the moment is likely to be dystopian pandemic films!).

During the pitch, it’s important to avoid tying yourself up in knots by claiming to have seen a film you haven’t - always be truthful, and write down any references that get mentioned as they may be useful.

Also, when you want to stand your ground for artistic reasons, do so with respect - it can also be useful to think in advance about some of the artistic compromises you would and wouldn’t be prepared to make.

What should you include in your pitch?

When it comes to the presentation itself, you should only take gimmicks if they supplement the pitch, don’t let them dominate and detract from your story. You should lead with genre, as this gives context and can also work as a frame of reference for your inspiration. Which section of the bookshop would you find this in? You should make it a rollercoaster, ensuring the conflict is compelling and remembering to show the vulnerability of your characters. But don’t talk about all the characters in your film, try and only refer to the main protagonist/antagonist by name, and refer to other characters as their roles e.g. ‘teacher’ or ‘bully’.

Your aim should be to sell your project in one or two impactful sentences delivered at the end of the pitch - you want to hear the magic words ‘TELL ME MORE!’.

The person you are presenting to may ask what are the cinematic references, sound design, score, look, whose story is it? Who do we root for? Why do we care? What’s the lead character ark - how do they change over the course of the story? Is there verisimilitude? What is fresh, new or original about your story? Is the story castable? What type of actor might take these parts and why?

There will be people who don’t get your idea, and that’s OK. The more pitches you do, the easier it will get - Pete and Luke suggested pitching random strangers or even trying out your proposal on cold callers!

Remember - you rarely lose by pitching badly, but you always lose by not pitching at all!

SAE London Digital Film Production student Imaan Samson said: "I enjoyed realising the simplicity of approaching a pitch, it's good to hear that the industry is very interested in hearing from upcoming artists."

After getting all of this excellent advice and more, SAE Glasgow student Sean tried his hand at pitching his film live in front of the session attendees. Sean’s pitch was delivered with confidence and he got some really positive feedback from Luke and Pete, who praised his clear references of outlaws, punk rock, and the wild west. In the way of feedback, they encouraged Sean to fill the full two minutes available to him, and suggested that they had heard more about what the story was like and what the film would be than what the story was.

SAE Glasgow Game Art Animation student Sofia Athanasopoulou said: “I found the event quite enjoyable and entertaining at times along with educational and informative. Previous to that I hadn't known how many things I can do to improve my pitching skills. I found it really clever to have an SAE student volunteer to pitch his idea and hear live feedback so that everyone could practically see the process live and see exactly what someone might ask for in a pitch and identify what might be missing. It was a great opportunity to connect with The Pitch fund and hear their views on the industry and how people stand out to producers. Very well organised too.”

SAE Glasgow Digital Film Production student Paul Ewing said: “The pitching masterclass was excellent and gave real insight into industry practices and procedures. It also led to further networking and provided a key resource (Enter The Pitch) which will be a valuable stepping stone in progressing forward in my career.”

We’d like to echo these students’ sentiments and say a huge thanks to Luke and Pete for a really informative and engaging session!

Students who are interested in attending further events with Luke and Pete can take part in ‘Pitch In’ sessions - these are designed to help you test out your pitch in a relaxed group environment online. The sessions offer an opportunity to try out a two-minute pitch and receive feedback. This can be something you are working on, something you are planning to pitch to The Pitch film fund, or you can just attend as an observer. To sign up for a Pitch In session, register here: https://bit.ly/3bNsOET

The Pitch film fund is also running a special event next week called ‘Creating A Pitch Deck’ with Jasmin Morrison - founder of Soul Cognition. This will take place from 10.30 - 11.45 am on 28 May, and you can join here.