Alex Over took part in the Sound Design for Creative Media short course at SAE London, and really enjoyed his experience - so much that he wanted to share his insights with others looking to develop their musical talents. Read his blog in full below:

When looking to attend SAE, for me what was important was to take part in some form of a short course, as I’d previously already completed various music courses elsewhere. As like most artists in your development, you learn new skills, tricks, directions and a lot about yourself. It's an ever-growing learning process for me. It's a mixture of all the influences from attending events, performing, collaborating and making music to further learning.

The Sound Design Course was one I have personally been keeping an eye out on for some time, firstly because I moved to London at the end of 2018 and was looking to attend here at SAE nearly ten years ago. Still, it just wasn't the right fit/time, so this was an excellent way to get myself to experience it in some way. It reminded me what progress I have made and what's been very exciting is that I have been making new progressions in my career within music, as I gave myself a bit of a break away from it to reconnect and this course has helped me immensely.

The vital part to all of this, for me, was to get back into the practical side of things; in the background, I've been collectively building a new portfolio of work. When I started this course I was already well underway with this, but the skills and extended learning I gained from this course really did inspire me - it accelerated the process.

Christian Duka, the tutor, was excellent. His approach to showcase 'how to listen to music' to start with, was for me one of the main things that stood out. My classmates were brilliant, and we all brought a different spin to the class. As early as the second week we had an experience where we all decided to meet in Greenwich back in January of this year (2020). The fact that there were four of us in the group was another highlight/an advantage throughout the time on the course. We decided that we would take turns to be blindfolded. We walked, a variety of locations within the area - including walking under the tunnel via the Thames. While this was happening, we were capturing the whole trip in audio form. The entire point of this was to listen to sound from a different perspective. You heard things you would never have noticed. When being guided, when blindfolded, brings out a completely different perspective when listening to sounds, so you become a lot more focused. It makes you appreciate the sounds which are around you and how this has a subconscious effect on you without realising it. 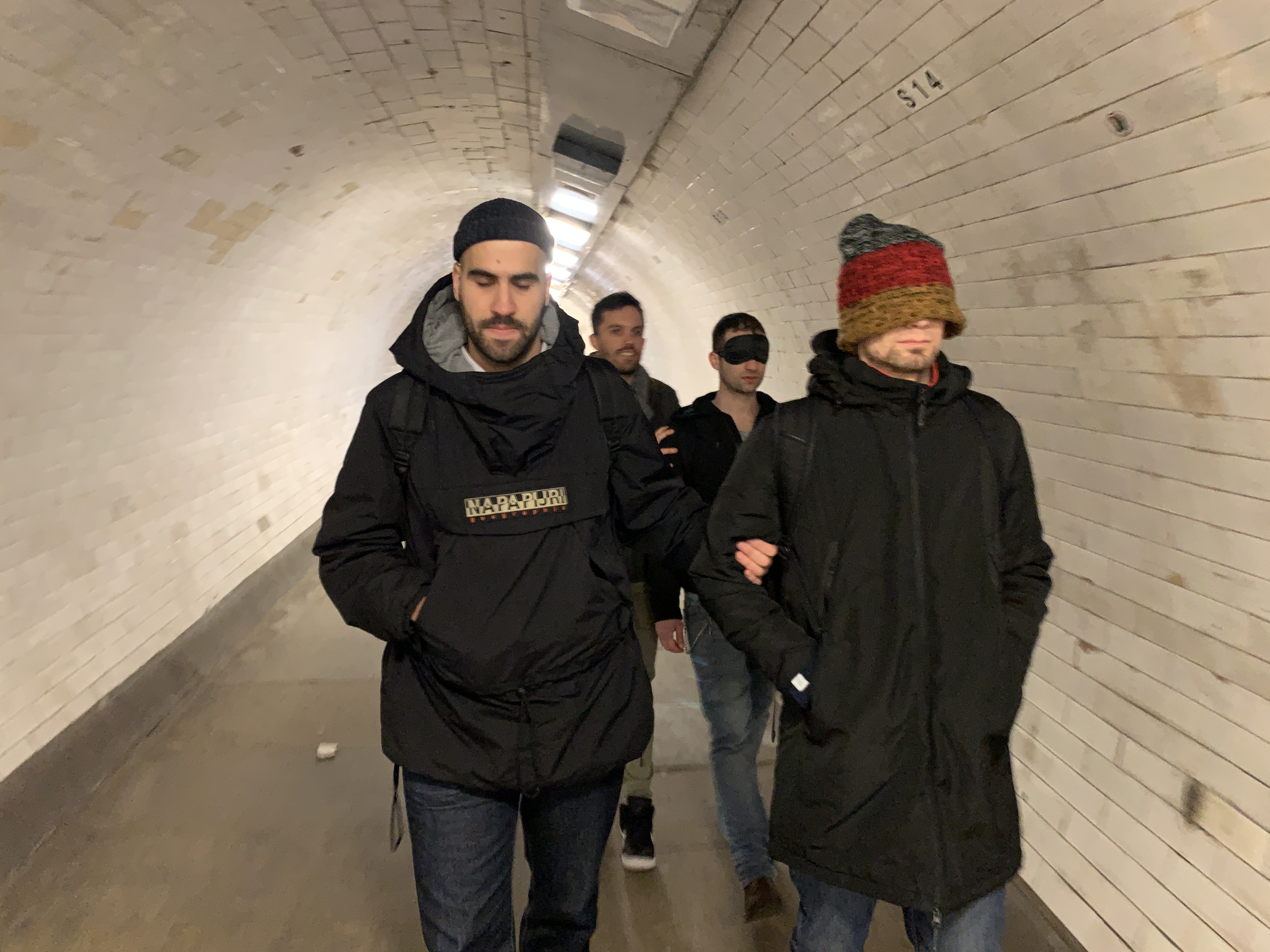 The classes were twice a week, and we learnt new skills within the course, and were set tasks out of class too. It was full-on and didn't feel 'part-time', but that was the great thing about it. We had a chance, to focus on many areas such as recording sounds in the Foley studio via an Avid C24 system; learning signal flow and contact microphones (the importance of this was fundamental); advance sound theory; digital audio processing; Ableton warping; dynamic processing; effects processing, and, then able to add it into some moving images. All had to think about was the approach we were taking and the sounds we wanted to capture. We also had a brief for the gaming department and paired up to create our sounds to this. It was all very challenging but I knew I was learning a lot, as a result of this.

As the eighth week came in, like everyone we were hit by the virus, which was challenging to say the least, but we continued like always, still working towards the last part of the course. We were prepping for an event, where my classmates and I were going to showcase our own 'Major Project concepts' and create a listening experience within a venue around the corner from SAE London. We hope to showcase this later in the year, once things hopefully settle down.

Originally when approaching my project, I had the idea around the 'Sense of Home' which was going to be a collaborative idea of what 'Home' meant to be — planning what areas to capture sounds. Waking up, getting ready, going to restaurants, taking public transport, and having conversations I have with people on a day to day basis, walking through some regions of where I live, markets and so on. Still, due to the current situation, it made me go in a different direction. I did capture certain sounds I wanted and tested out new ways of approaching projects with what we had learnt in class. During this time, it has helped me release music elsewhere and had already had a label in the pipeline created with a few of my close friends.

I've always had a thought about creating an album, one which represents all the experiences I've had through music so far. That's artists I've seen, met, worked with and learnt from. It's an excellent chance for myself to highlight what I'd like to showcase moving forward, and this project has helped me give a more precise idea. As you listen through this example, the first section is just elements I put together using a more Sound Design-based approach. Then it moves into the early stages of a project I worked on, which is more towards the club scene but using some of the sounds I captured and in a way, I like it as this carries on with another project I was working on, then the last section again is like the first part. As a result of this, I've already gone further into the album project and am planning to set a deadline and release it alongside some of the new music I have coming out.

Overall, anybody who is looking to attend a part-time course in Sound Design – do it! There isn't anything else out there like it, it's more general I find and isn't narrowed down (as much). Usually, you get to try a bit of everything, but be ready; it’s a lot to take in, be curious, open to it and you'll learn a lot, there's no doubt about that. I’m sad that it's finished but very pleased I did it.

The Sound Design for Creative Media short course is a hands-on 12-week course where students obtain all the skills they need to be a Sound Designer in the digital age. With a focus on experimental uses of cutting edge audio technologies, the course covers sound design for a range of applications - including VR and AR experiences, video games, films, sonic arts and audio/visual installations. Find out more here.