SAE London was a site for Global Game Jam 2020, with programmers, artists and sound designers collaborating for a 48-hour period from 31 January - 2 February to create a game based around the theme of ‘repair’.

On Friday, the Game Jam theme was announced and attendees got some helpful pre-Jam advice from SAE Extra speaker Oscar Clark. Oscar has been in the games industry since 1998 and has been involved with marketing, game design, development, launch and operations of numerous market-leading games services and technologies - so he definitely had lots of useful tips for the jammers. 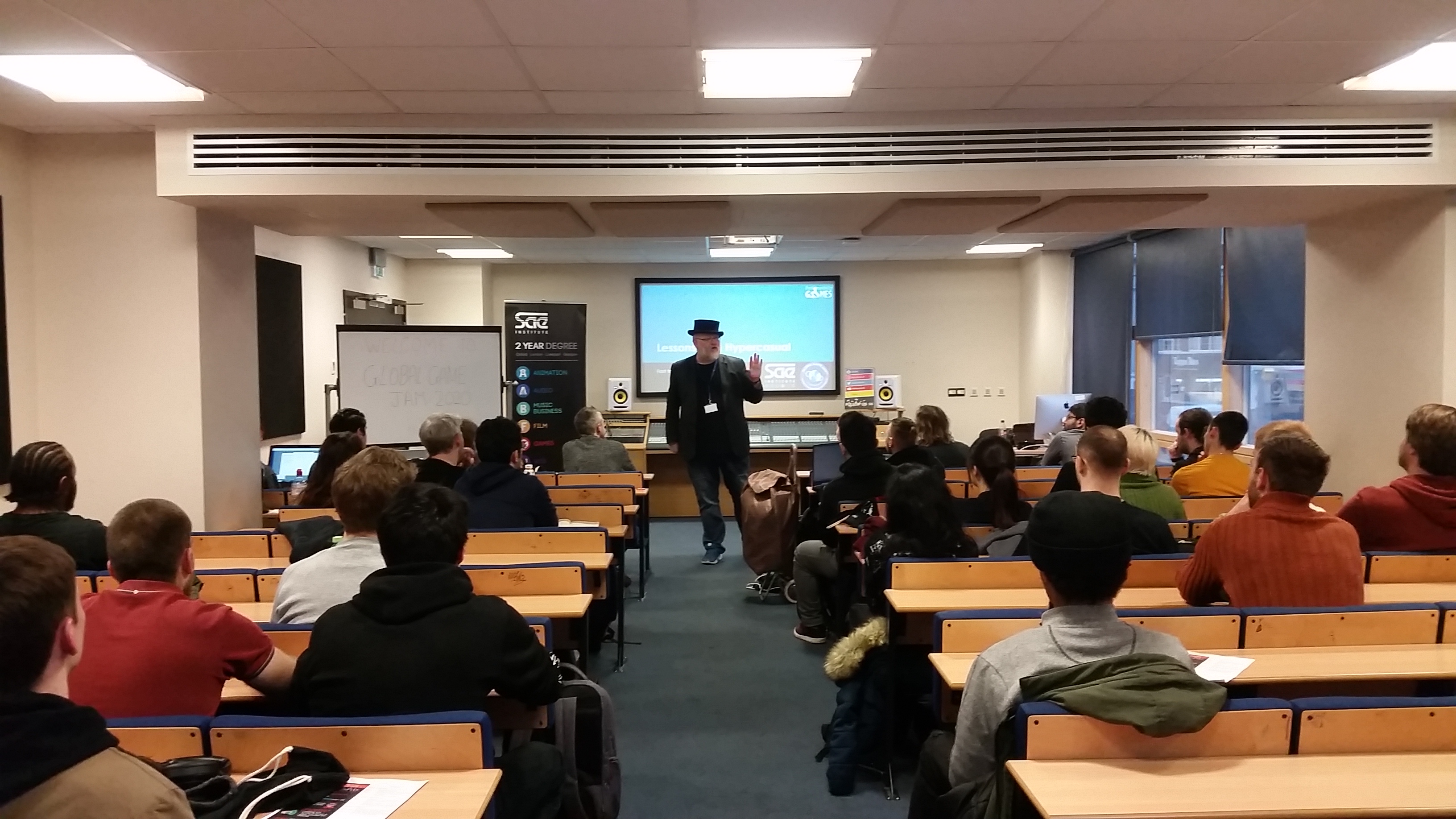 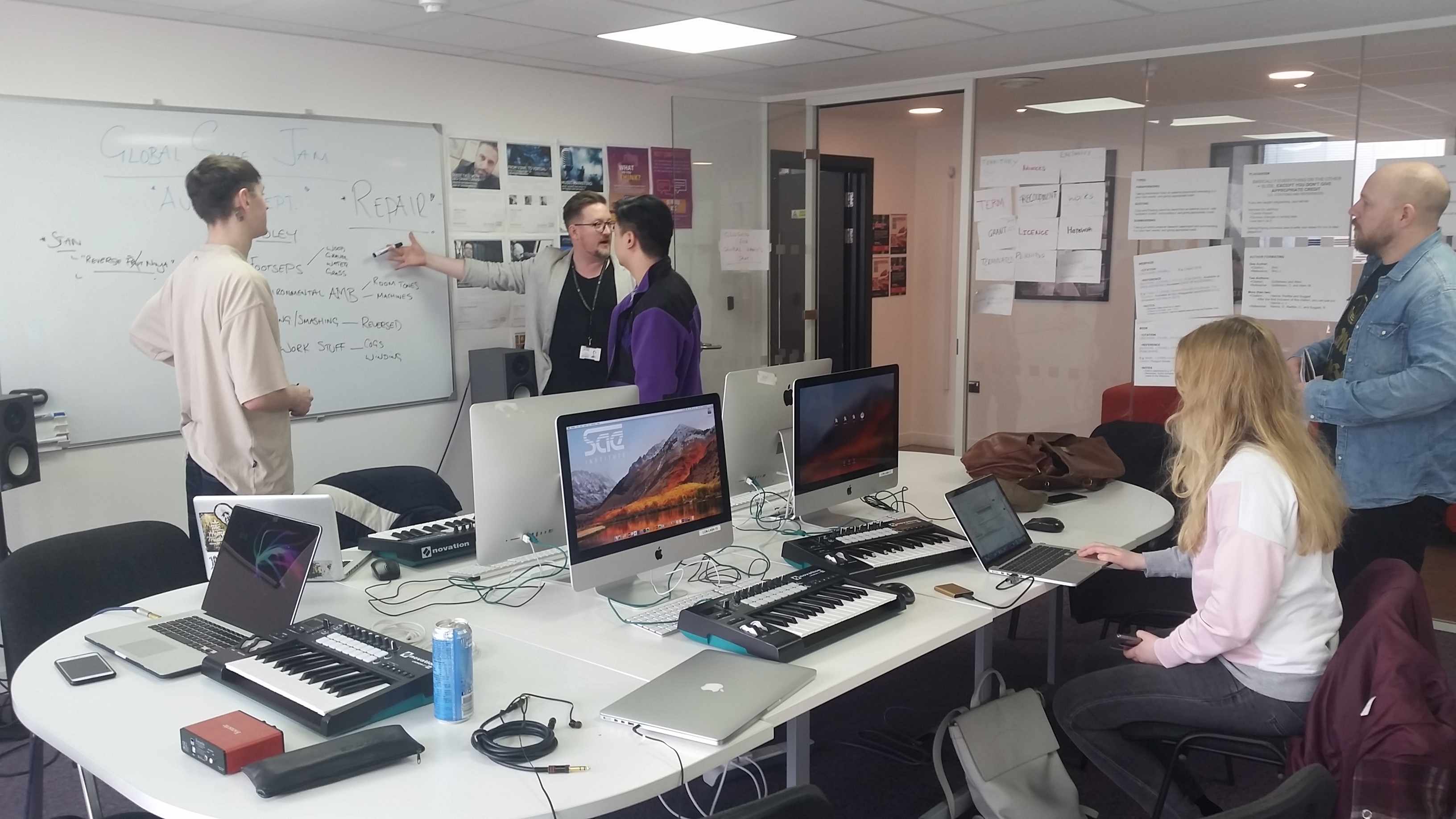 There was a dedicated Foley studio set up, with lecturer Jamie Stonehouse helping oversee Audio students who created sound design elements for the teams to implement in their games.

In total, there were ten games completed over the weekend, and you can download and play them all here. There was even a team participating via Skype from SAE Oxford - linking up with SAE London Games Programming lecturer Erik di Biase to create a game called ‘Grim Repair’!

SAE London Programme Coordinator for Games Programming and Web Development, Karsten Vermeulen said: “Global Game Jam 2020 was a resounding success, possibly the best one we have organised so far! A total of ten talented teams produced ten amazing games, and by the time Sunday afternoon came around, we were all exhausted! During the weekend, we had London's Bossa Studios work on a game, we had a team tirelessly produce a VR game and four of my second year programming students took over the games room to form their own 'studio'. But I think the award for 'longest Skype call in history' goes to Erik, Aidan and Oxford art/animation students, who worked endlessly together and pulled off an amazing, and quirky, two-player game. The vibe within the building, throughout the entire weekend, was one big buzz and attendees were even peeking into other rooms to see what was going on. Overall, it was a great success, from the talk that guest speaker Oscar Clark gave on Friday afternoon until the very end, when we all shared a few pints at our partner brewery Signature Brew. I can safely say that we have now firmly established ourselves as a guaranteed future Global Game Jam location!”

The groups all interpreted the Game Jam theme of ‘repair’ in a different way. The SAE Oxford collaboration with Erik in London was a quick-paced game called ‘Grim Repair’ where you have to challenge a rival, either AI or a local 2nd player, racing to repair as many souls as possible by roaming the game level. The team was made up of students Emma Watts, Carys Lacey, Chris Tsikas, Rebecca Martin and Andrew Walsh, as well as Game Art Animation lecturer Aidan Coughlan and Games Programming lecturer Erik di Biase. Aidan Whiting said: “Game Jam was a great opportunity to see what it feels like to follow the whole pipeline and at the end of it, as a team, have produced an entire working game. It felt very rewarding to be able to play a game that we had worked on and see what we were capable of.” 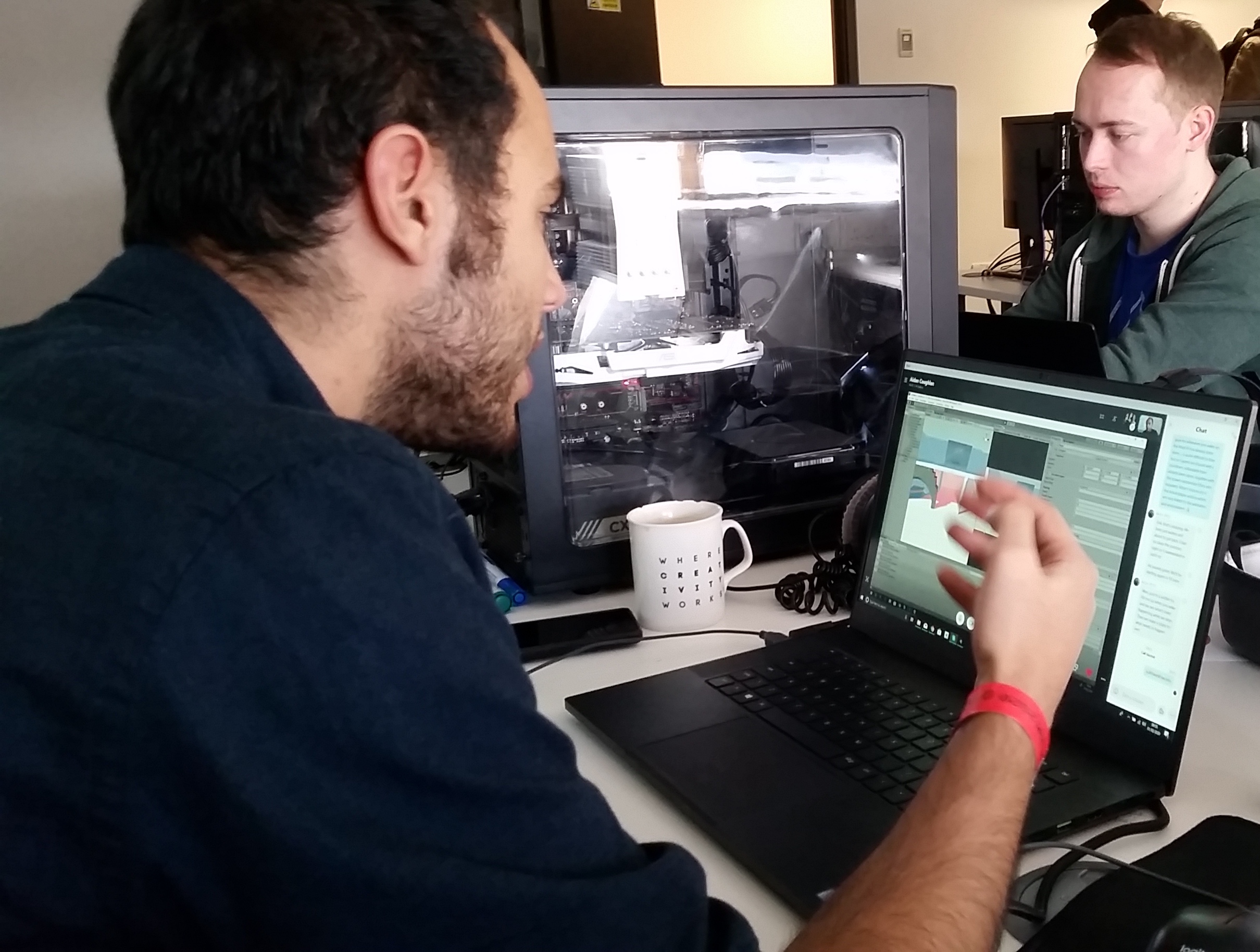 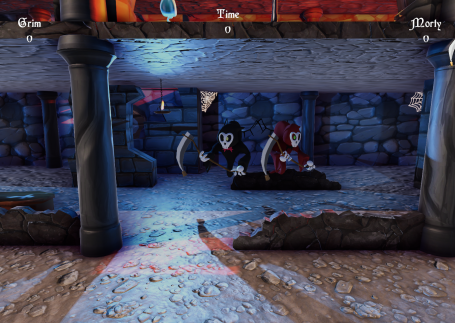 Erik said: “The game jam went well, and the Oxford team and myself grouped up at the end of the first day. The Skype collaboration was surprisingly effective, as it allowed us to successfully communicate and figure out game mechanics and game designing features without too many problems. The downside is that the game presentation ended up not being as effective as it would have been with everyone together. The Oxford team focused on making all of the asset-based content from 2D UI to 3D characters and the environment. They also made the level design to their liking as I focused on the code side. Once the level had been finished, I implemented post-processing effects to overhaul the entire experience and made sure everything blends together with gameplay and UI. During the jam, Skype was always active, with my screen on share so they could have real-time view over the game status. Whenever development was taking breaks, I converted myself to the SAE wildcard for any team's troubleshooting issue, to make sure everyone could reach a complete game by the end of the jam.”

SAE London students worked on ‘Who Are You?’, a game which had a more figurative interpretation of the theme of repair, following a character who is in a coma and has to work to recover lost memories. The team was made up of Timothy Bracy, Steven Cooner, Thomas Kiley, Sam Mickan, Tiberiu Pripu and Anna Winterstein. Anna said: I'm very happy with our finished game. We didn't use any assets, and as a result, the game's atmosphere feels so personal to us. For sure, it has some small bugs and could be improved in some ways, but that doesn't stop it from reflecting our vision - which is what matters most, in the end.” 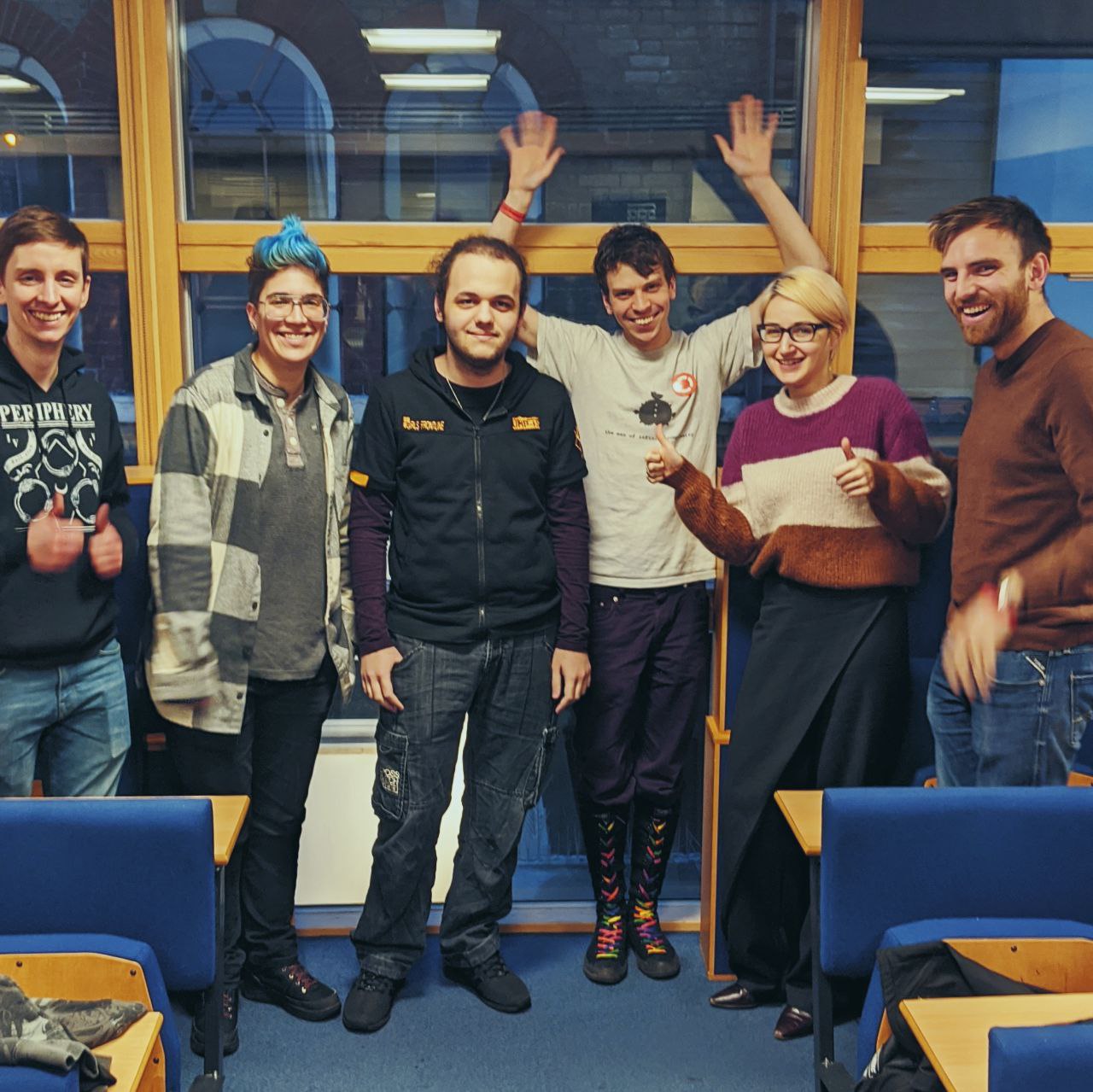 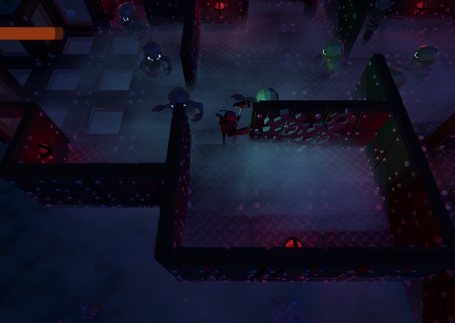 The 'Who Are You?' team | Cyberpunk inspired SteamSquid

Another group of SAE students worked together to create a top-down survival repair game called ‘SteamSquid’, where there are leakages on your steampunk submarine and if you don't fix them in time, enemies will start spawning in and you have to kill them before they kill you. The team was made up of Freddie Hodge, Joao Parreira, Pedro Parreira and Thomas Wood.

SAE students and alumni also collaborated on ‘Ride or Die’, which used Unity. The team was made up of Spencer Walker-Fooks, Connor Swannell, Jet Sweeney, Amirali Mohayaee, Tachan Harris, Joshua Paras, and Waira Sanchez de la Pava. Spencer said: “It was a fun experience, and likely one I will repeat. We had a bad case of feature creep, continually adding new features into the game!”

A different team created a 'Blacksmith VR' game, which is a simulator where you need to fix as many weapons as you can before the times runs out. Blacksmith VR was created by Sam Cooley, Jamie Morgan, Imran Bepari, India Grant and Sule Bepari using Unity, and Oculus. India said: “The overall experience of making a game in 48 hours was actually really good. It was my first Game Jam and I really enjoyed it despite the lack of sleep! Working as a team and eventually putting all of our individual projects together at the end to make the final product was incredibly satisfying as we finally got to see our end result. Of course, it was stressful and frustrating at times when we couldn't figure out certain things but that's all a part of the Game Jam experience!”

One team created a game called ‘Crash Site’, where two astronauts are stranded on a desert planet and have to race to put their ship back together before the oxygen runs out. This group was made up of Olivian Dirlau, Lewis Rodman Adu, Onur Ereren, Clara Forwood and Daniel Santorowski, Andy Robinson, Ben Heyderman, Hayden Olivier and Francesca Ann Lock. Clara said: “The main idea behind our game was just to make something fun. There were so many game ideas initially but we ended up with a cute rebuild the spaceship game. None of us were particularly experienced with the process of making games but I for one found it utterly addictive. The prototype stage reminded me of an episode of the gumball TV series where they stripped the animation to glitchy 3D models. I love our little game even if I didn't do that much.” 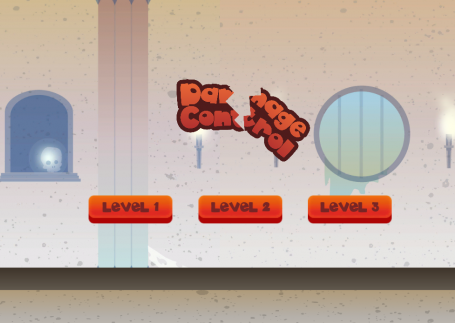 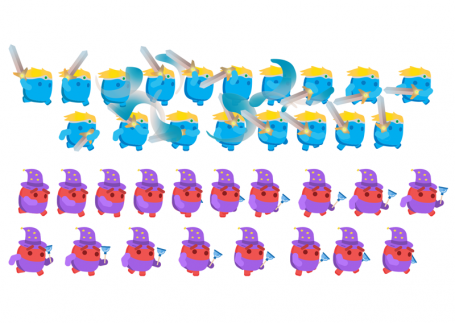 ‘Damage Control’ was created by Jihae Han, Jacob Taylor, Konstantin Ivanovich, Nashmia Riaz and Mark Trump using Unity, Photoshop, Trello, Visual Studio and GitHub. The idea came from how Link in Legend of Zelda goes around smashing pots recklessly. What if the main guy had to repair stuff in his wake? The game’s protagonist follows the hero around, fixing various items that he breaks. Mark said: “While we were brainstorming, we split our ideas into two categories; themes and mechanics that we'd actually be able to implement in two days. We found the idea of looking at the player's actions in other games out of context particularly amusing and settled on the tradition that RPGs have of guiding the player to smash or open everything they can in search of treasure. As a simple mechanic to support this, we agreed on "reverse Fruit Ninja" to match this year's theme (quickly gesturing to fix things, instead of to slice them).”

One small step for man, one Giant Leap for Bossa Studios

Bossa Studios worked on ‘Giant Leap’, a 2D local two-player multiplayer. The team was made up of Tom Jackson, Klaudia Kovacs, Reece Banbury, Oliver Thurston, Chel Webster and Jeff Ramos. In the game, you crash-land on a planet and your goal is to get to a rocket to leave the planet. However the rocket can only carry one of you, so it's a race to see who gets there first. You get to the rocket by gathering scrap and building small spaceships from what you find. The game has 3 phases, gathering phase, a building phase and simulation phase. Klaudia said: “I’m very pleased and proud of the final game. There are some bugs, but nothing game-breaking.”

Another team worked on ‘Genepair’, where you have to repair the DNA of an animal that you will use in a deathmatch, so the aim is to create the ultimate fighter and strive for victory. This team was made up of Andrea Brunato, Andres Molina, and Marcel Calderon.

Then dynamic duo Luke Thompson and Pete West worked together to create ‘Letter Lab’, where you have to repair the name of each level using a hilariously complex system of machines.

Thanks to everyone who gave up their weekend to make the event possible, and to all the amazing creatives who got together to create such brilliant games.

We’ll be following up with each of the teams to find out more about their projects, but in the meantime, you can download and play the results of SAE London Global Game Jam 2020 here.