A new compilation album of SAE student work titled ‘Sounds of the SAE Vol 3’ is now available for you to listen to, featuring 15 amazing tracks from producers, artists, innovators, creators and movers and shakers at SAE campuses around the UK.

Lead Student Experience Officer Eddie Nwolie who launched the project said: “Now in its third volume, Sounds of the SAE is a cross-campus compilation album which highlights some of the amazing creativity on display at SAE. Give it a listen - you won’t be disappointed!”

The first track is ‘Last 1’ by Kemps, aka Conrad Alexandre is a 20-year-old from America, obsessed with UK dance music genres, who also enjoys classic boombap hip hop.

The second track is ‘Kingsland Roads’ by Xemplar, aka Jacob Watson-Spooner who is a soul/jazz-inspired hip-hop/neo soul producer from South East London, as well as a first year Audio Production student.

DOLLER (real name Dorante - silent ‘e’ - Johnson or DJ) is a recording artist, musician, entertainer, creative director and founder of clothing line Go Getters from North London who specialises in various forms of hip hop and R&B. ‘Money Song’ is the third song on Sounds of the SAE Vol 3. His inspiration while growing up were his uncles and his dad, he said: "My uncle (Flash) used to DJ as a dancehall MC and my dad Kush Tafari is a roots and reggae singer. My uncle Mikey used to have a sound system." 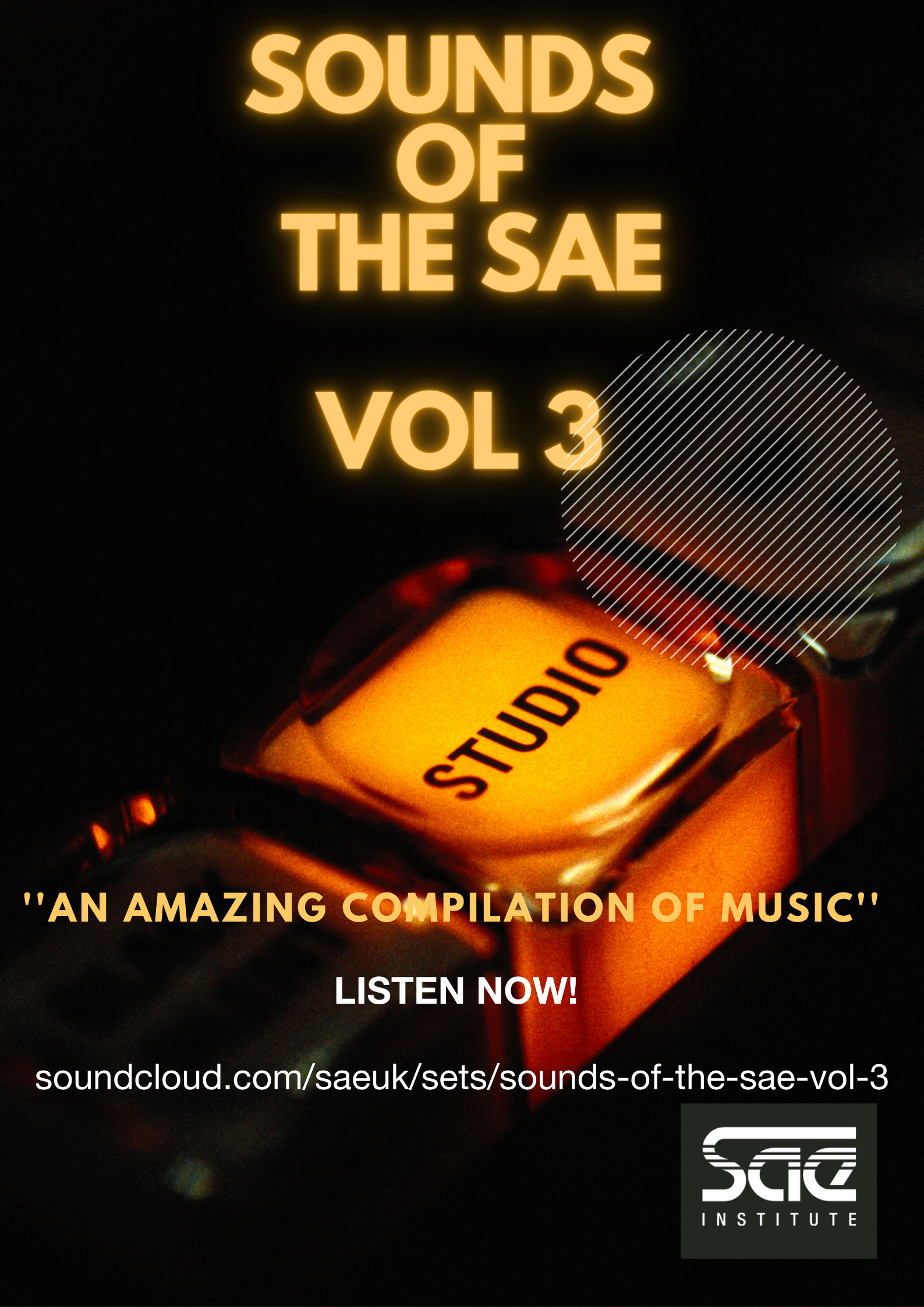 The fourth song on the tracklist is ‘Cassiopea Andromeda’ by Mario D’ambrosio, an Italian DJ/producer and sound engineer studying Audio at SAE London. Mario said: “Electronic music is my main passion and I always try to put my feelings in the tracks I make. 'Cassiopea Andromeda' to me inspires calm and hope. I hope whoever listens to it will feel safe especially with what is currently happening in the world.”

Coming in at number five is B.A.L.A’s ‘Midnight Bluez’, a song by Amit Kapila. Amit said: “The song is reflecting on the current struggles of society, specifically focusing on the fact that people of ethnicity are going through the same issues and oppression that have been apparent decades ago and that we need to unify against systematic control. I just wanted to raise awareness.”

Track number six is Enigma’s ‘JuLie’. The song is by Mihai-Andrei Ciupitu, a Romanian electronic Music Producer and DJ that focuses on minimal house. Always knowledge driven and curious, guided by the 10,000 hours rule, he managed to get featured on Rayzeh's YouTube channel with his first EP.

Artur Ribeiro Da Costa’s ‘Mr Uber’ takes up slot number seven, followed by Leontas’ ‘Black Magic’ at track number eight. Thomas Pew aka SAILA’s ‘Dreams’ comes in at slot number nine. Thomas said: “I'm a producer and artist from South East London studying Audio Production. I make music influenced by multiple genres, such as hip hop, soul, electronic and rock, and with my music I try to take the listener on a journey with me.”

Lloyd St Caire’s ‘End This Way’ at track number 10 is followed by 31hours’ ‘drip-drop’. The song, by co-writers Jake Kavanagh and Jo Griffin, is a quirky indie-track. Jake said: “Using skills from my time studying film-making at SAE Oxford I also create a lot of the visuals and music videos.”

‘A Girl from Outer Space’ comes in at track number twelve, and is produced by first year Audio student Garry Scott James, who is a musician (mainly guitar) as well as a producer.

Track number 13 is Kev Dixon’s ‘Manunkind’. Kev is a composer, producer, performer and multi-instrumentalist who is studying Music Business at SAE Liverpool. With the release of ‘Manunkind’ from his new 4 track EP, Kev returns to his roots as a purveyor of powerful, emotive, yet beautifully melodic Alternative Rock. He said: “Writing, producing and playing every instrument on the recording afforded me a creative freedom I’ve never had before. I’ve never felt happier making music as I have making this EP, especially during such difficult times. It’s certainly reignited my desire to write new songs and explore my back-catalogue further.”

Coming in at number 14 is Jack Little aka Shypho’s ‘Astray’. Jack said: “I'm mainly a progressive house and techno producer, though my productions tend to be more melodically and atmospherically driven rather than being made specifically for club environments. I started my course at SAE back in 2018, and recently submitted my major project aiming for BSc Audio Production."

And last but by no means least is Heartblake’s ‘Fake It’, by Igor, and produced by Yzzi. Igor said: “I mainly listen to music that is trending and I try to reproduce that kind of sound. I do an Audio course which I'm sure will give me an understanding of how things actually work in production and I hope that I will be able to achieve sounds that I want easily.”

Listen to Sounds of the SAE Vol 3 here.