The duo graduated from SAE in 2015, and Shayo founded the multimedia production company, Rosegold Group, which Nick co-runs. Shayo is a musician/director/editor who has worked with Skepta, Davido and Dappy, producing a number of documentaries including one on Boko Haram which premiered at the BFI.

Nick is a camera operator/editor who has worked with artists such as Jammer and Riton, and brands such as Lexus. He’s also worked on many short films, including one which got into Sundance Festival last January, as well as dozens of other respected film festivals worldwide. 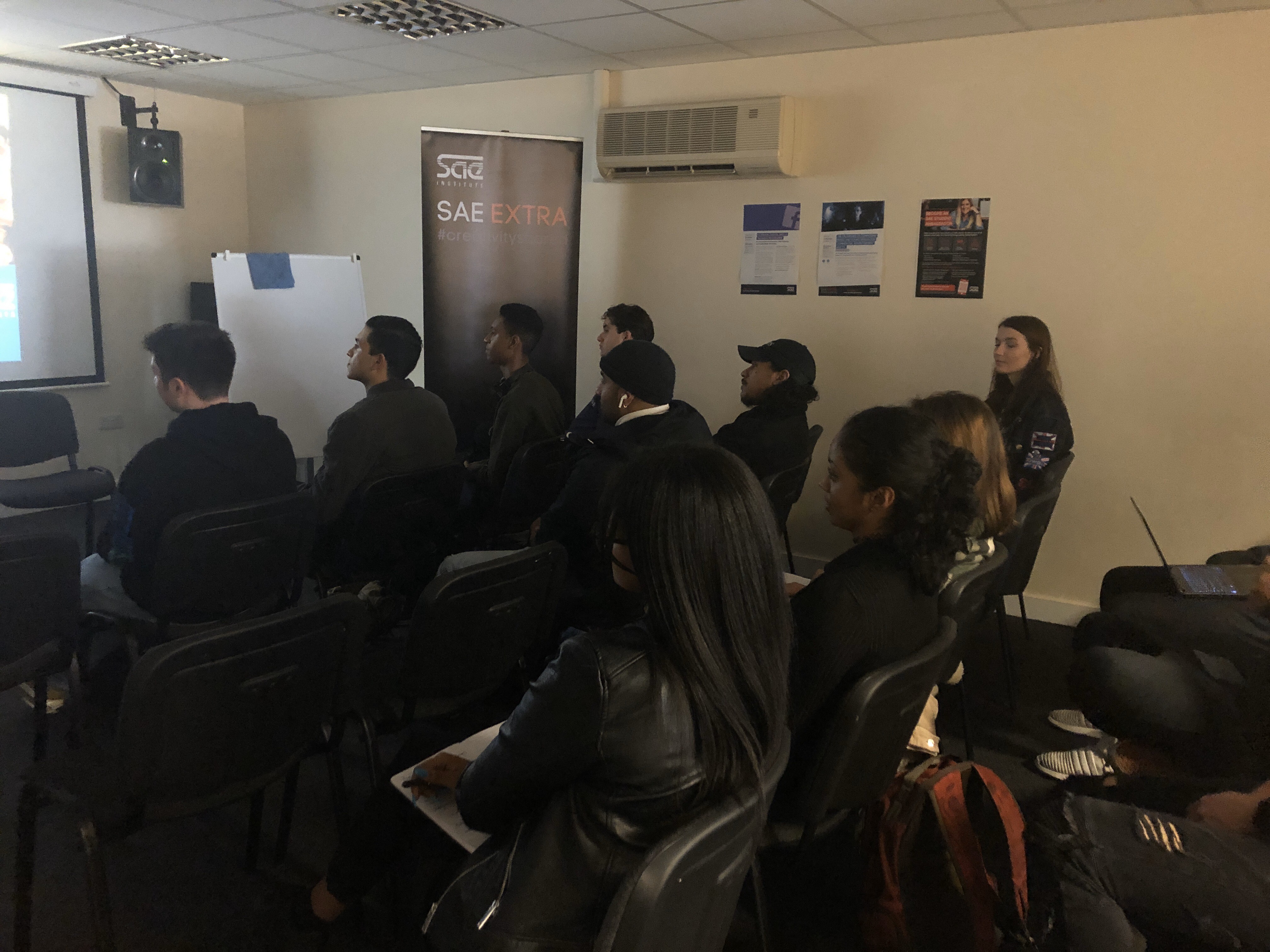 Nick said: “Our masterclass was very interactive which the students seemed to love, we covered many topics from networking the smart way, maximising what's available around you and dealing with clients. I was surprised by how many students stayed behind and spoke to us, they were very inspired and motivated from our talk which was great to see!"

The duo’s masterclass covered how best to manouevre through the industry and how an individual’s personality and character can open doors for them. So long as they have intense focus and drive, the sky's the limit, said Shayo, as this is the recipe for making an impact and being one of the greats in one’s desired field. Shayo said: “The students responded well, as the majority of them stayed behind for one-on-ones, asking questions from simple contracts, to strategies in moving up the ladder and improving their skill sets.”

The masterclass taught attendees about the levels of hard work, drive and motivation needed to be successful as a filmmaker.

Sayem Miah said: “The Filmmaking masterclass with Shayo and Nick was a positive experience. Reasons being, I’ve learnt how much hard work and dedication you need to put in to become part of the film industry. I also learnt that I’ll need to build my own network with people who want to work in the same field as me and this is something I will take on board in the future. It was a good experience also meeting other people who are trying to get into the same industry as me as I learnt about what they want to do in the future and what they are doing right now. Overall, it was a fantastic experience and I thank Shayo and Nick for the advice they have given me.”

Networking is a vital skill to have in the Film industry, and although it can be daunting to approach people you don’t know, it’s a crucial ability to have when it comes to landing jobs and meeting clients. It is good to be able to practice in the informal setting of an SAE Extra masterclass, with networking opportunities after our guest speaker events.

Alexander Riad said: “After the masterclass with Shayo Three and Nick Brown from Rosegold group, I felt their expertise had reassured me to pursue making creative content, day in - day out. They also set some good ground rules for success, and painted a humbling picture of hard work, their little trick pointers will surely be kept in mind. Overall a very informative class, and the interaction with Rosegold Group created a personal, open environment.”

As well as motivating the attendees to achieve and stay focussed, Shayo and Nick gave some practical advice for improving your online presence and generating business.

Sam Kemp, who is a Director of Photography, said: “I really enjoyed the talk, I found they had some great tips on optimising your Instagram as a DP in order to generate business from it, as well as some very motivational words from Shayo on how to stay focussed as a freelancer. I also really enjoyed chatting to Nick and some other filmmakers who stayed behind after the talk to network and find out a bit more about each other.”

SAE Extra events like this are just one of the various ways in which SAE UK ensures its students are industry-ready by the time they graduate. We connect talented students with mentors outside of class, and offer them the chance to take an elective industry engagement module as part of their course.

We’d like to thank Shayo and Nick for providing such an engaging talk and we hope to see them at SAE again soon.