The film will be shown alongside some other Scottish short productions, with the event starting at 6.30pm with time for networking, and the films officially starting at 7.00 pm. Alasdair said: “I'm so glad the actors will get to see their work on the big screen. Without them and my magnificent crew, this film just wouldn't have turned out as good as it did.”

Conceal tells the story of a woman, Larissa Morgan, who is arrested after her husband is bludgeoned to death in his bed. Around half the film is an intense interrogation scene, where two detectives, DCI Thomas McKinley and DC Susan Kennedy grill Larissa about the killing. All the evidence points to Larissa, her clothes are soaked in her husband's blood and there is no sign of a stranger having been in her flat. 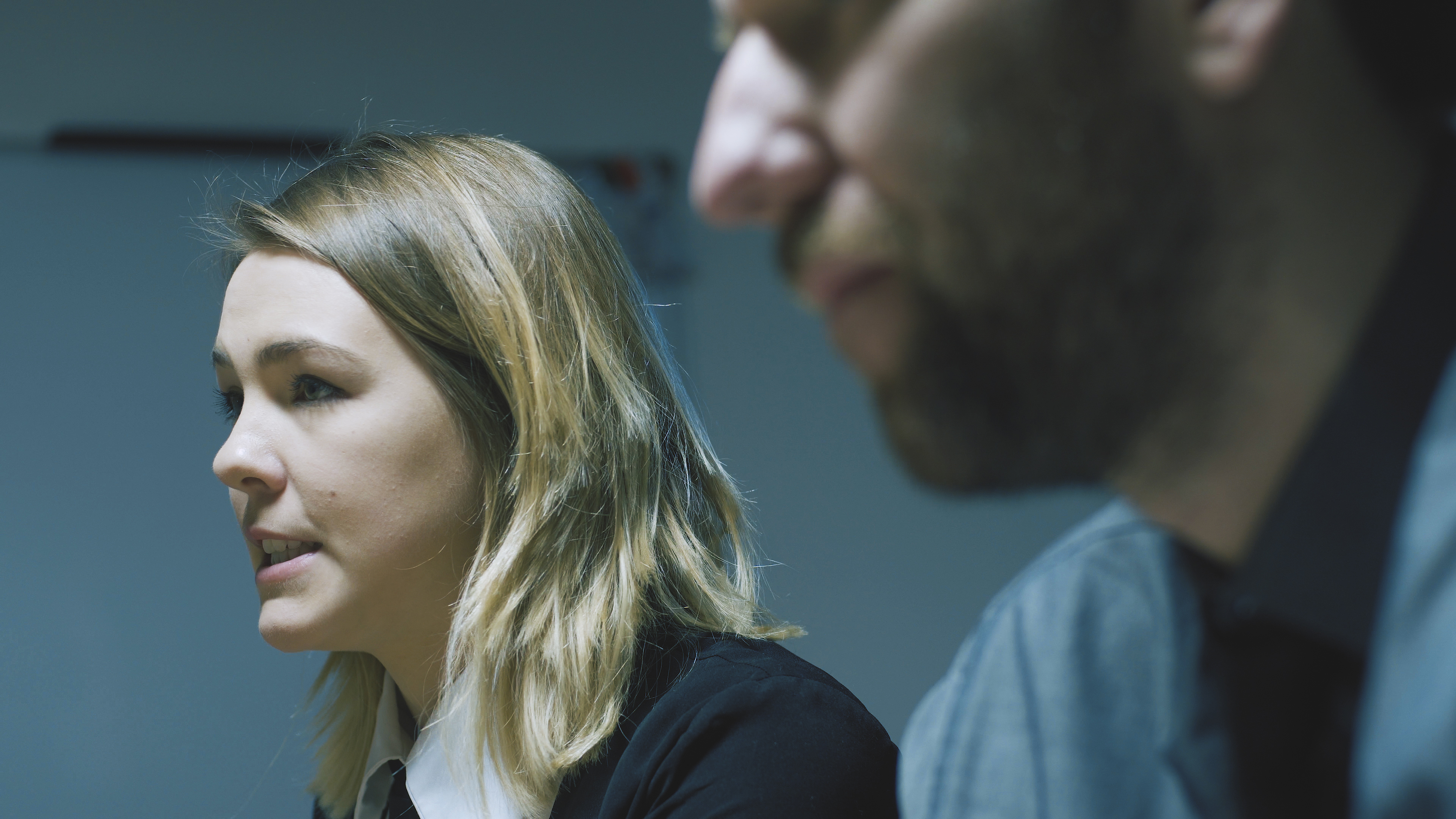 Intense: The detectives try and get to the truth during their interrogation of Larissa Morgan

There is one crucial piece of the puzzle missing, the murder weapon which forensics say was a domestic hammer. Larissa refuses to answer the questions and we see several flashbacks to her home life leading up to the killing. It becomes clear her husband was abusive to Larissa and also her daughter. Now the police have a motive. 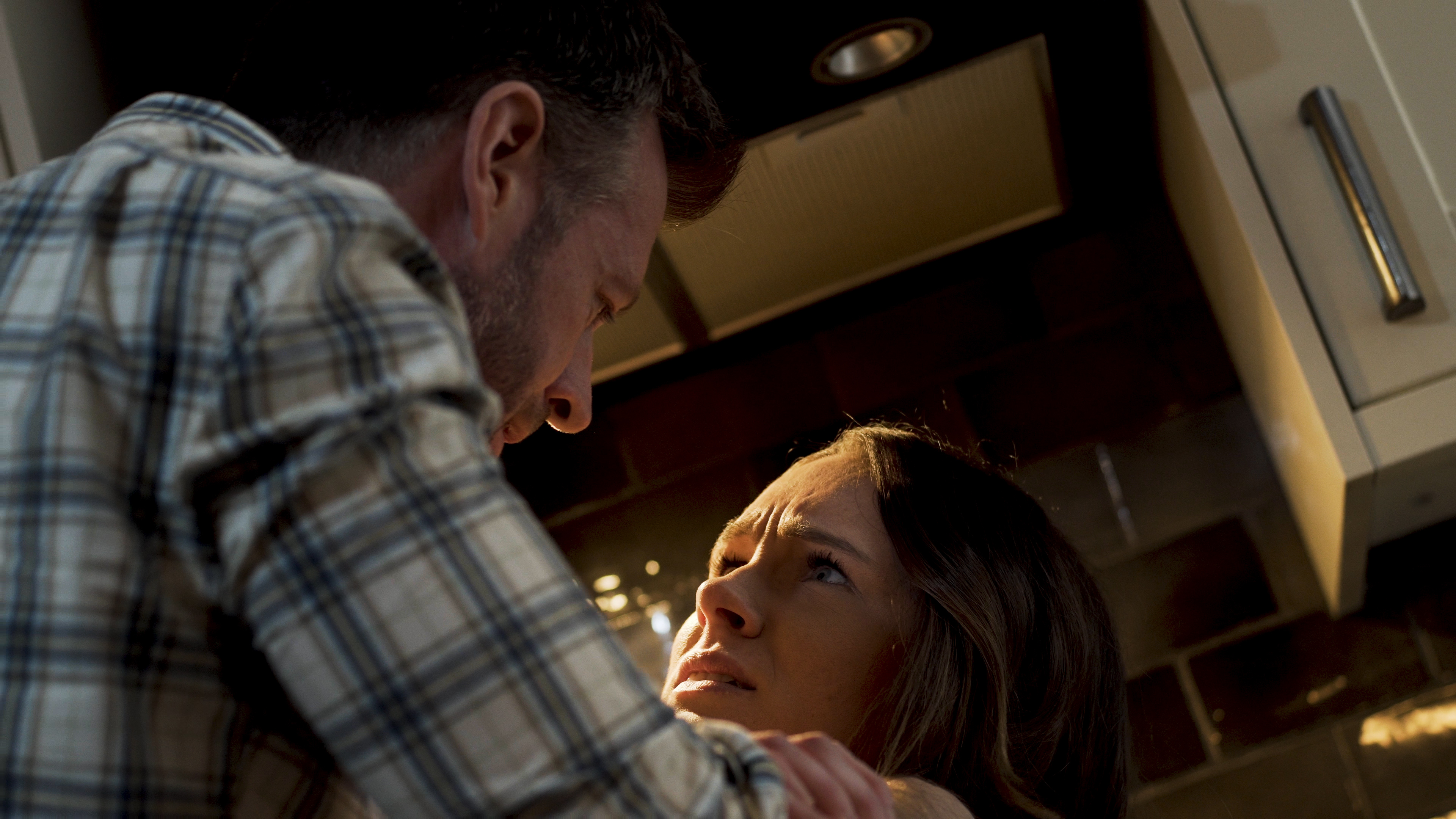 With Larissa refusing to co-operate, the detectives realise they have no option but to charge her -  but is there more to this murder than meets the eye.

Alasdair usually holds auditions for his film projects, but this one was an exception - he knew who he wanted for most of the cast in advance. Robert Carr was the first actor he had shown the script to and he came onboard as DCI McKinley. Originally McKinley had all the dialogue in the film but Alasdair had just finished another SAE film with Abbi Stevenson and she was incredible so he wrote the part of DC Kennedy specifically for her. Alasdair said: “It turned out her young rookie female cop character was a great foil to Robert's older slightly sexist detective. It adds a great dynamic to the film.” 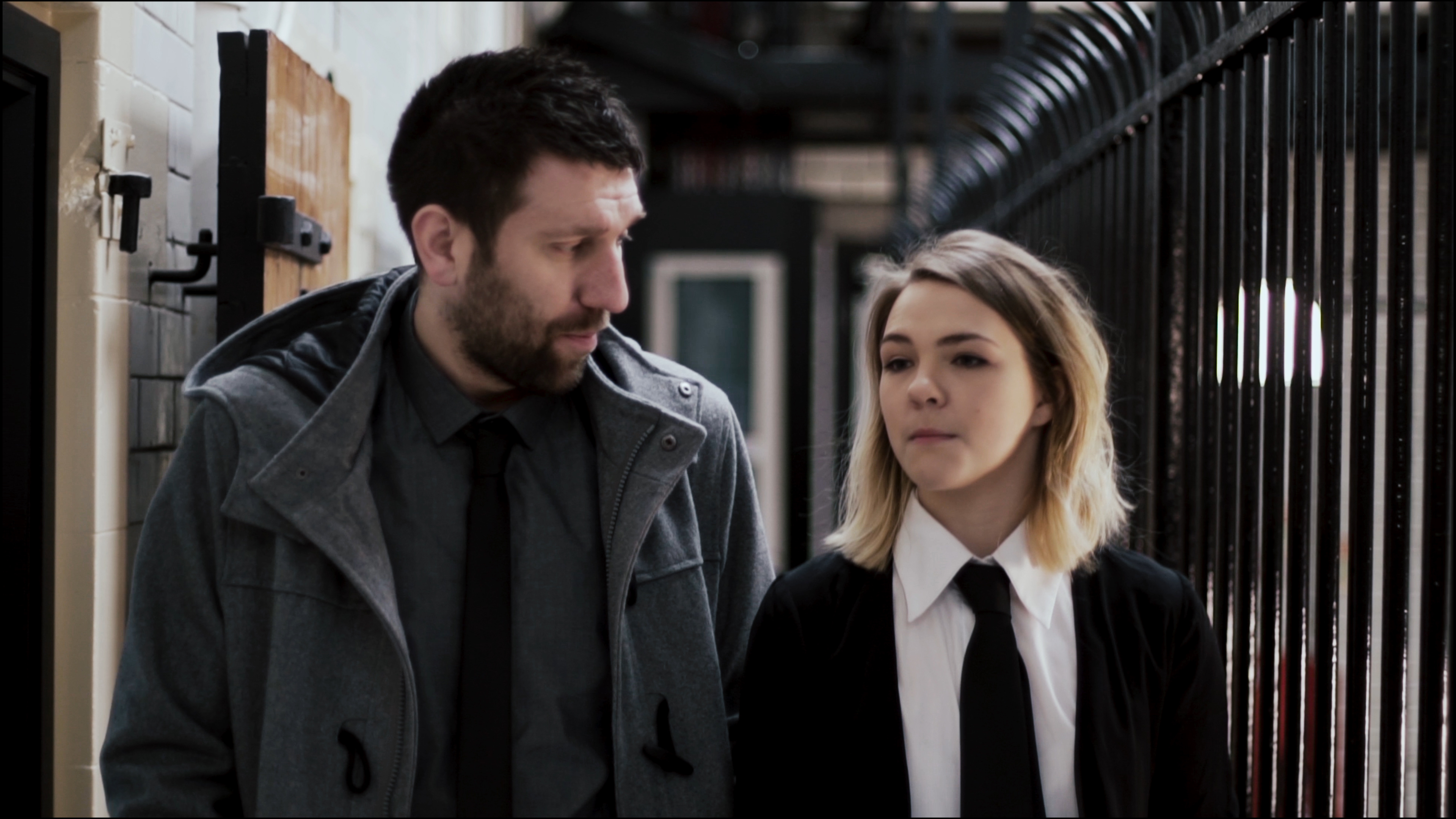 For the role of Larissa, Alasdair needed an actress who could convey really strong emotions with very few words. Alasdair said: “Jennifer McLuskey is incredible at this kind of acting. I'd worked with her before on a film called Beautiful Distraction and I always remember the incredible emotion she brought to that role. I cast James Gordon as the abusive husband, as I thought it would be good to have him playing against type, a real nasty piece of work compared to the more wholesome characters he usually plays.”

When it came to casting the daughter, there was a small problem; the young actress Alasdair used for films before has blonde hair, whereas Jennifer has long dark hair. But one day, a few weeks before shooting, Alasdair’s sister came round to his house with her daughter, Elsa. She was the right age, and crucially had long dark hair like Jennifer's, so she could easily pass for her daughter. Alasdair’s sister saw him looking and immediately guessed what was on his mind. Despite initially protesting because of the graphic violence of the film, she caved in after Elsa expressed an interest in taking on the role, as acting is something she is interested in.

The film’s DoP was SAE Film student James Raeburn. Alasdair said: “I'd always liked his work but hadn't really worked on anything substantial with him. He was thinking about using SAE cameras but I always liked the footage he got with his Sony a6500. I used my own Sony a6300 to film my final project.”

Audio student Greg Del Savio who had done several of Alasdair’s other films agreed to do location sound. He couldn't make the second day of shooting so Audio student Jen Anderson took over sound duties.

Alasdair’s Film student friend Michaela Simpson came on as 1st Assistant Director. He said: “Michaela is ruthlessly efficient when she's working on a film and movie-making seems to go a lot smoother when she's involved.”

There were also two makeup artists, Louisa Nugent who did the make-up for the interrogation scene, and Guyelle Anderson who did the gory effects for the hammer blow shots.

When it came to shooting the interrogation scene, they used the radio station Awaz FM (this location also features at the start of Alasdair’s Major Project, Southside Story). He said: “You would think noise might be an issue in such a location but the station has pretty good sound-proofing.”

On the day, the crew were confronted with a terrible scenario. They were renovating the floor below and the loud hammering made decent audio impossible. Alasdair said: “In all, I had a cast and crew of about 15 people and so there was no way I could reschedule another day to shoot. It was the first time in all my SAE work I thought I would have to abandon the project. So I went downstairs and explained to the workman we were filming. Incredibly, he agreed to stop hammering for two hours. We had scheduled about six hours for this scene so we had to work fast. This is where having a great crew and amazing actors paid off. We shot the entire scene - about six minutes of non-stop dialogue about eight times from different angles. The actors didn't get a line wrong, and when it came to editing, every take was useable.”

One particular technique that Alasdair and James tried in the film was when they shot the scene with the man being hammered to death. Alasdair said: “Even though it was a prop hammer, it could still cause a nasty blow. So what we did was we started with the hammer touching the actor's head then pulled it away. When it came to editing I reversed this shot and it looked pretty good, although we just used these shots briefly.”

Alasdair reckons that this film was made in the edit. He said: “We shot for about 10/12 hours in total, over two days. I spent longer editing this film than any other film I've made. I wanted to make every shot as perfect as possible, so being meticulous with nearly every frame was crucial. I never count the number of times you watch your own film when you're editing but I must have watched Conceal four or five hundred times. I wrote an original score for the film, which I was pleased with. The climax of the film really comes alive with the swelling score. My original plan was to reshoot Conceal after I'd finished at SAE and spend some money on it. In the end, it turned out so well there really is no point.”

The short film would eventually influence Alasdair’s Major Project, Southside Story. He said: “One huge influence on Southside Story was the audio. This movie is a poetic film so it is nearly all about visuals rather than story-telling. I spent many weeks composing original music for the project, ensuring each piece complimented the shots in the film. Rhythmic electronica for the trains and buses on the early morning commute, bright and breezy pop music for the workers opening up their stores. And again the editing skills I'd learned at SAE were crucial in bringing this film together. Constant practice in this field really helps you hone your skills. I also paid to have the film colour graded, as I did with Conceal. This really brought both films to life.”

You can find out more about Alasdair’s Major Project here.

Click here to get tickets for the screening at Cafe Flicker on 6 February. 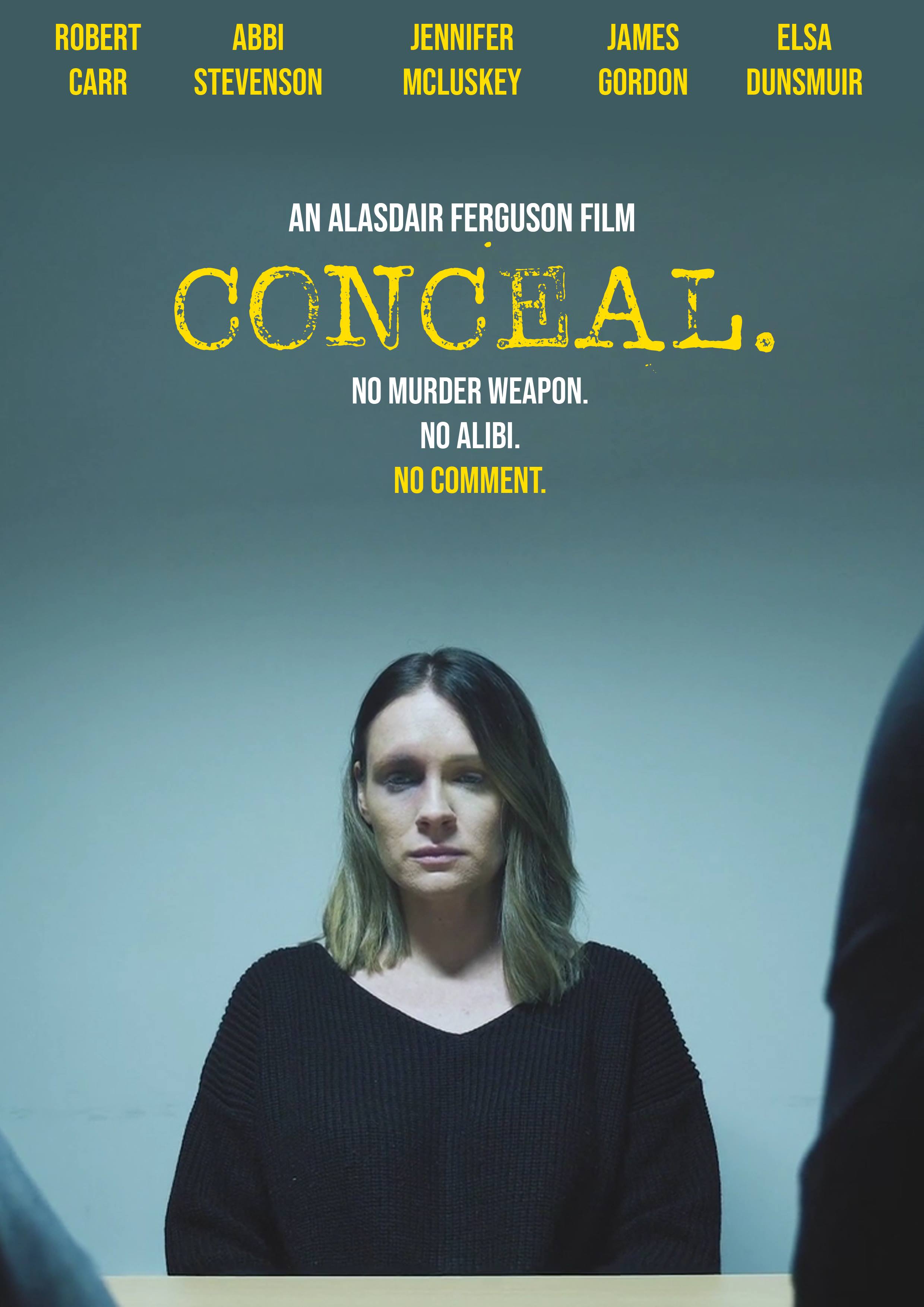