SAE Oxford alumnus Conner Turner recently came back to deliver two talks, one to SAE London students on 3 September, and one to SAE Oxford students on 16 October. At the SAE Oxford talk, there were also some of our partner school students from John Mason School in Abingdon in attendance.

SAE Oxford Audio Production student Harry Gledhill said: “I thought it was an excellent insight into the art of modern remixing and the sheer amount of work that’s involved.”

Conner Turner was signed to Black Butter Records (Sony UK) as one half of the duo NVOY, whilst studying at SAE in 2014. Conner and fellow NVOY member, James, were both at SAE the same time as when Disclosure/Julio Bashmore and House music was coming back to the forefront of the UK Dance music scene.

SoundCloud was also really popular when Conner was at SAE - the duo uploaded music during their second year and had thousands of plays within a few weeks. Conner said they didn’t really send anything to labels, they messaged them off the back of their SoundCloud presence. Conner said: “If your music is good enough and you build up a following yourself, labels will come to you.”

Things have changed since then though; Conner noted that Instagram and TikTok are the two most popular platforms and said all artists should be utilising them - if you have the personality you can get huge DJ bookings and recording contracts. Spotify for Artists is also a good tool for students to see how their work is being received by listeners. Conner said: “Collaborate with the film students at SAE and get your friends to share it - record labels will be scouting Instagram these days!”

Conner added, there’s nothing wrong with the tried-and-tested route of sending tracks to labels, particularly if you feel like you’re a good fit for them. Just make sure you don’t send them your music until you’re 100% happy with it. The best way of knowing your music is in the right place is getting it out there - if people are listening and sharing it then you know you’re doing a good job!

Don’t limit yourself in terms of genre, either; James used to be a guitarist in a metal band, and Conner was into Radio 1 Pop, before he started to venture into the Nottingham scene (where he is from), which was more of an underground nightclub scene.

The duo were lucky to be earning enough money from their music to be able to move to London after graduating. NVOY toured all around the world - Europe, Vegas, Asia - and have done studio sessions across the globe.

Over the last couple of years they have been doing more independent work - for Conner that production for other artists, sample pack design and a bit of teaching. Conner has recently worked on some exciting forthcoming projects with a couple of advert/film companies. He got a lot of these roles through his work as NVOY, but said that there’s no harm in approaching agencies with adverts you have made your own music for. If you do this, delete the audio, create your own and make sure you’re making it clear that you didn’t do the music originally, but this is what you are capable of. Conner’s long-term goal is to have a studio and do sound for films.

After giving a bit of information about his professional background, Conner did some mythbusting about what a remix actually is. He said it’s a version of a recording altered for artistic purposes, before he went on to deconstruct and explain each of the constituent parts of his remix of Jax Jones’ ‘You Don’t Know Me’, which reached No. 3 in the UK charts.

When they were first sent the track, NVOY felt that the original didn’t fit the material they usually choose to play in their DJ sets. They were big fans of the vocal, so they asked the label for the original stems so they could create a version they would want to play live. Conner learned an important lesson about agreeing what format a label are going to send stems in at the beginning of a project - in this case they sent them wet, with fairly harsh autotune on, whilst Conner wanted them dry so he could be more creative and open with the vocals.

There was a delay between the completion of the remix and its eventual release, because the label had originally intended to use the remix when sales started to dip - which they didn’t for some time. In the meantime, Jax Jones was using the remix as a closer to his live show, which led fans of the track to comment on YouTube clips, creating a hype about the NVOY remix.

Conner works out of a studio space in the attic of his house, and stressed that you really don’t need a load of fancy gear to create good music. As many of the students in attendance were students from SAE Oxford’s partner school, John Mason School from Abingdon, Conner talked about some of the entry level platforms for creating music. He started with the Swedish digital audio workstation, Reason, but said there’s a cool new online platform called Soundtrap where students can all collaborate on a track with friends via email. The platform, which has been acquired by Spotify, has a really easy to use interface which Conner said makes moving to Logic Pro a ‘logical’ next step.

Nowadays, Conner primarily works on Logic Pro X, and makes use of a variety of plugins. He likes to create an efficient workflow, so he has recording, production and remix templates which already have key components such as an audio track and recurrently used instruments set up. For instance, he has NVOY claps and NVOY hi-hats set up so it is easier to create remixes in a short period of time and control the workflow.

In the deconstruction of the Jax Jones track, Conner said he tries not to have anything other than the kick and bass below 200Hz as this makes it sound cleaner. SAE Oxford Academic Coordinator Dean McCarthy added that this was a common trick to engineering female vocals on pop records.

Conner tends to limit a lot of tracks at the beginning - rather than compressing at the end, as he said it can sound slightly better this way.

John Mason School student and keen musician, Aidan Kemp-Harper, asked, “Do you ever use presets?”, to which Conner said he definitely does sometimes. He uses two default reverb presets, and advised attendees that EQing reverbs can help stop them from overpowering the mix.

Conner uses Melodyne to create interesting gap fillers in the vocal. Conner said: “I think it’s a great platform for being really creative, not just for tuning words or changing the format.”

Aidan also asked: “Do you ever do sound design separately from remixing tracks?”, to which Conner said he does, and that he saves them with a sensible name and will come back and use them at a later date when he’s feeling not so inspired.

Conner said computer generated music can sometimes sound too perfect and sometimes he manipulates it so that there are small imperfections that make it sound more natural. 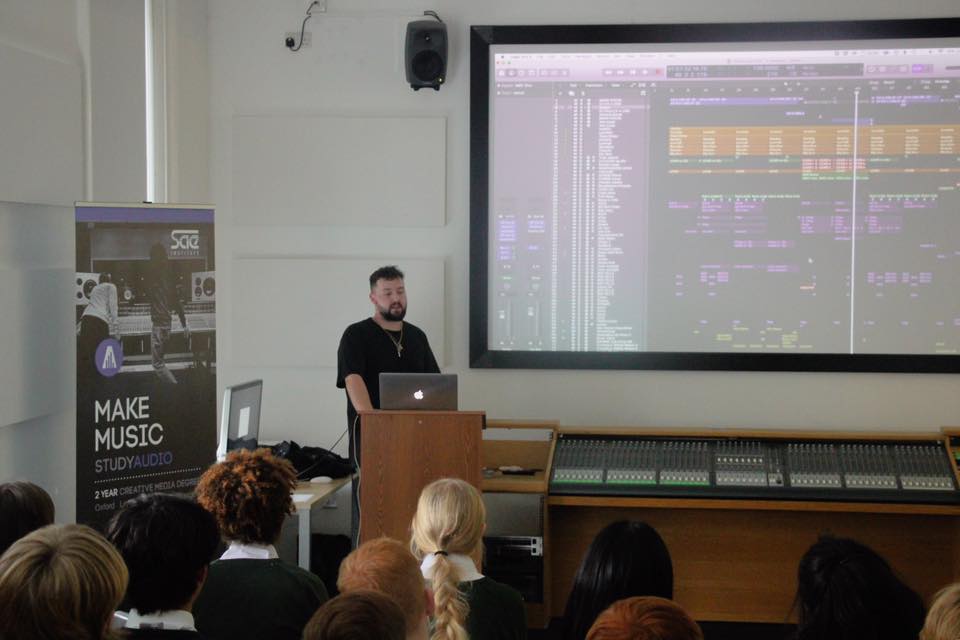 Two components he always incorporates are some vinyl noise in the background and party people (talking in a train station). He also uses white noise quite a lot, because he felt like when it got to the mix stage the lead wasn’t sitting in the right place but another layer didn’t work. Conner learned this from the Australian record producer, Flume (Harley Edward Streten), who does this quite a lot.

Structurally, Conner doesn’t like Dance music tracks which are samey the whole way through, so likes that this track has two definitive sections.

He likes to do something with the melodic parts themselves rather than adding sound effects in e.g. adding a tremelo on a track and adjusting the depth.

Conner was asked about techniques for widening sound - and he said he uses Sample Delay in Logic, uses doublers in Wave, although he feels like the more he widens stuff the harder he makes his job, as mono compatibility is really important in nightclubs. With pop stuff it will be different, he added.

When it comes to mastering he will send across his work to his friend who will tell him whether it needs work. He tends to keep his chain quite strict, although he will sometimes change the EQ in the master. He said: “You should really just be checking the song and make sure it sounds good across all formats.”

But at the final stage, it’s important to get a second set of ears - especially when you’re working in your bedroom.

Conner’s deconstruction of his remix of Jax Jones’ ‘You Don’t Know Me’ certainly gave the attendees a lot of food for thought, and judging by the questions asked by those in attendance, he definitely inspired people to go away and try and try new things.

SAE London student Claudio Ambruoso said: “Conner was great, knowledgeable of course, he had a good sense of humour, and gave a lot of space to answering questions. He showed how he completed a professional remix, explained into detail which plugins he uses and why, giving lots of advice, not only technical but also in terms of business relationships. I was very glad I attended, I now can say I have a better idea not only on how to create a remix, but also my own tracks.”

SAE Oxford student Jonny Bagnall Nevers said:"The masterclass with Conner was incredibly detailed, he revealed a few industry tips I wasn't privy to that I'm now implementing in my own production."

Click here to listen to Aidan Kemp-Harper’s music on SoundCloud.