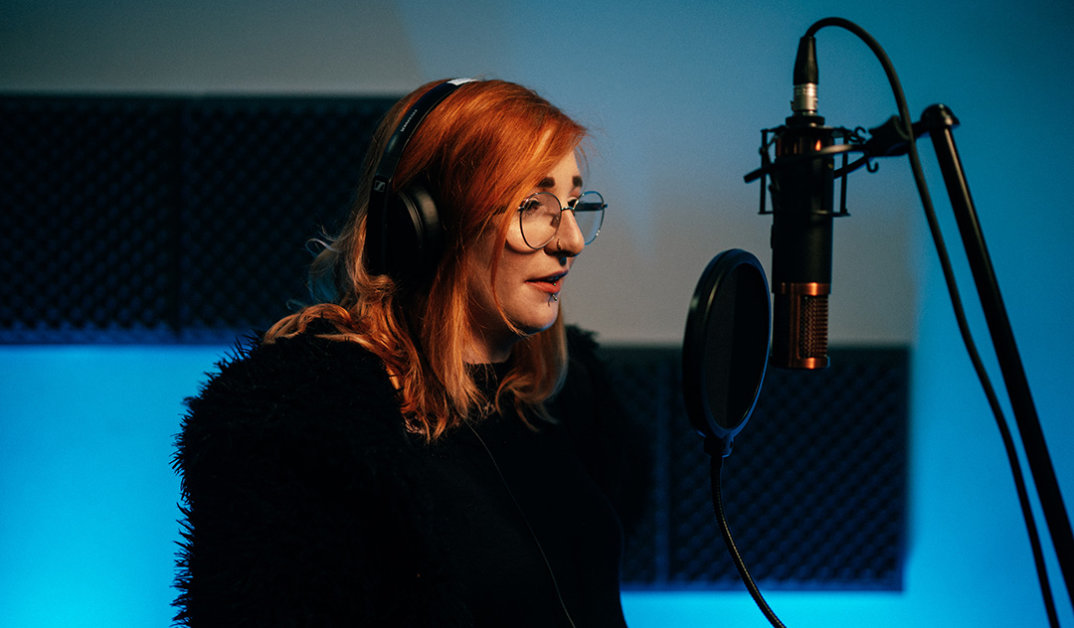 "Another big pull [towards SAE] for me was the smaller classes meaning I’d have a better relationship with the lecturers and also how the lecturers were much younger than those at your typical university, with many still working in the industry with great experience under their belt or just recently stopped with great industry connections and years of service."

Hi Shannon, great to meet you, could you introduce yourself and tell us what you do at SAE Glasgow?

My name is Shannon. I’ve just completed my first year at SAE Glasgow in film production, during the hard times of Covid-19. I aspire to be a film director, producer and writer once I’ve graduated. During my time at SAE I’ve been a class representative, student ambassador and also helped organise and start SAE LIFE, a society for LGBTQ+ individuals and allies.

Can you tell us why you picked SAE Glasgow to study digital film production?

Before applying to SAE I shopped around and hadn’t found many universities which suited the type of learning I aspired to do. As I’d previously studied film I wanted to find somewhere which included more practical based learning instead of theory based, with 90% of Scottish universities focusing more on the theory side which wasn’t for me. I knew I wanted to study in Glasgow and after speaking to a few friends and looking around I found SAE Glasgow. My old film lecturers pointed me in the direction of someone who studied at SAE and I heard how much they enjoyed their experience with SAE and how the type of learning was exactly what I was looking for. After applying I done a campus tour and fell in love and heard more about the course and what it would entail. Another big pull for me was the smaller classes meaning I’d have a better relationship with the lecturers and also how the lecturers were much younger than those at your typical university, with many still working in the industry with great experience under their belt or just recently stopped with great industry connections and years of service.

What do you love about Glasgow the most?

I love how diverse and creative Glasgow is as a city. I was raised in Ayrshire but my family had came from Glasgow with many still staying in the surrounding areas so I always had a deep love for the city. Glasgow is well known for its thriving nightlife, hosting great festivals, events and also being one of the top places for film in the UK. The culture and creativity of the city has always been my favourite part, you will always have a great night in the city with tons of events, gigs and shows being held every night of the week and every corner you turn you’ll find an amazing venue. It’s also a city like no other in my opinion, with people making the city what it is and has tons of interesting connections to history and Scottish culture.

Are there local film makers that inspire your work?

As a kid I was a big Alan Cumming fan with him staring and directing some of my favourite films. Another local filmmaker who really inspires my work is John McPhail who has made one of my favourite musicals (Anna and the Apocalypse), I’ve also met him during one of my old film courses and received some amazing advice from him and he seems like a lovely chap. I would love to write and direct my own musical at one point as not only is my passion for film but I’ve also loved music since I was young. Lastly would also be the female writer Kyrsty Wilson-Cairns, behind the Oscar winning film 1917, who is one of the first Scottish female filmmakers that I know of to make it big and at her age also. Although I have watched many great shows and film shot in Scotland I do tend to find many of the creators are from the UK, not specifically Scotland which can be a tad upsetting at times.

What advice would you give someone who is looking to study digital film production?

My advice to anyone coming to study film production may sound a little cliché but is probably the best advice I’ve been given and has stuck with me.

1.     Most importantly make time for yourself, family and friends – don’t let your life come second as it can be hard to succeed when you’re deprived or struggling mentally.

2.     Study hard and find new resources and ways to learn. Try to watch some tutorials online and collect different resources that could help in the future. Try linkedin courses or anything similar. Read some books. There is plenty of resources available that will make your time studying easier and also benefit your future.

3.     Write. Film. Create. Don’t let the modules take over and when you have time work on your own projects. The more film work you do, the better you get. As the old saying goes practice makes perfect and the harder you work the more it’ll benefit you and your studies. Also use this and any work you have done before to make a portfolio whether this is online or in a cardboard box (I’d say do both as it’s always best to have paper copies too.)

4.     Look into film by budding filmmakers. Watch behind the scenes and commentary from films (My favourite to watch being Peter Jackson’s director commentary on LOTR which focuses on everything that went into making the masterpiece that LOTR is.) Watch plenty of films and tv shows.

5.     Lastly, have fun and don’t stress too much. Film shouldn’t just be a job but also something you love. If you’re not having fun, take a step back and think why this could be.